Many of us have done it. Been THAT GUY or THAT GIRL at the party who has one, or dare I say 2 too many drinks and transitions from tipsy-ville to uh-oh land. Supposed friends even cheer you on as you make the journey. Recently, I witnessed a perfectly sound human being lose control of her liquid vacation.  We all watched indulgently, since she “really had been working hard and needed a break.” As the evening progressed she developed repeat-itis, then slurzy – and all about topics that would never have been brought up without booze. Eventually, when the entertainment value dropped due to the repeat-itis, she was convinced to go to bed.

The following day, our poor victim awoke with a dreadful hangover and an odd sense of regret and shame.  It was the “I have a feeling I said too much, but I’m not sure what I said too much about” guilt.  No problem.  That’s what friends are for, right? 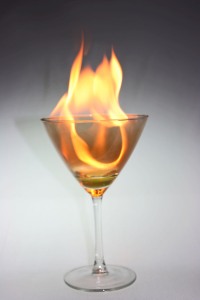 All those friends who egged on the drinking with such understanding are the same ones who delighted in repeating every embarrassing thing “Repeatica” said – not only to the victim herself, but to pretty much anyone within hearing distance.  These remembrances were delivered amidst spasms of laughter, and quickly followed by a composed expression of compassion.  “You really needed to blow off some steam.  I’m so glad you had a chance to do that.”  Meanwhile, Repeatica vowed to never drink again.

So why do we feel the need to tell someone everything they did while under the influence?  Maybe because they were so humorous. Maybe because we want to feel superior. Maybe because someone has done the same thing to us in the past, or perhaps it’s an unwritten post-party law. Whatever the reason, we obviously enjoy it.

The moral of the story? Choose your drinking buddies not only for the quality of their booze, but for their faulty memory and complete discretion.

Good luck with that.