I have a pain in my neck. A big, giant pain. This is not a set up for a husband/children/job joke. It’s really just the fault of IDIOT drivers talking or texting on cell phones who insist on ramming me from behind while I innocently sit at stop lights minding my own business and NOT TEXTING. This has happened at least three times and caused some sort of arthritic/degenerative blah-blah to my neck that in layman’s terms means my neck is totally jacked up on occassion.

And yes, the fact that I am capable of hurting myself while sleeping is probably not wholly unexpected by those who know me best. This even beats the Great Tendon Ripping Event of 1990 which occurred as I walked along and slightly rolled my foot off the edge of the sidewalk, resulting in the application of a cast for several weeks until I ripped it off with a screwdriver. (Side note: I think a different kind of screwdriver may have been responsible for my unsteadiness on the sidewalk to begin with.)

The point of all this rambling is that I am on some sort of cocktail of drugs (under a doctor’s supervision) that involves my carrying a bag around with pain-killer, Valium, steroids, anti-inflammatory, and some sort of nerve medication to prevent seizures. I’m not quite clear how that got in the mix, but I don’t like to pry.

The good news is, I am definitely feeling better and can actually move my neck (head?) without turning my whole body from the waist. The bad news is, my mother (who called from out-of-town yesterday) practically had apoplexy when I went into my medication recital and declared I was going to end up like Shelly Winters.

Shelley Winters?? Like from the Poseidon Adventure?? That’s the best she can do? That IS bad news. I told her I preferred my friend Max’s comparison to Judy Garland and asked that she please refer to me as such in future telecommunication. 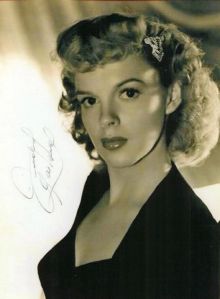 Just for that, I’m not breaking the next Valium in half.

(Say hello to my leetle friend.)

2 thoughts on “V IS FOR VICTORY. AND VALIUM.”