See Wales Tours picked us up this morning and we drove with five others, and our guide, Adrian, to Langland where we were let off the bus to take a leisurely 30-40 minute stroll along a paved walkway high above the sea.

And just like in the movies, that’s when it got weird. The walkway was blocked off and labeled “under construction.” A paper sign with a big arrow directed us to climb UP what can best be described as a steep, slightly muddy ski slope, to bypass the construction.

After a brief time of spinning in circles and muttering, “You’ve got to be kidding…” we realized we had no choice, as our van would be waiting for us at the end of the “walk,” and it was too late to turn back.

Once we reached a point that was a little less steep, we paused. Sandy pulled out her video recorder to begin a message to our loved ones, (just in case) and catch our breath. Catching our breath was difficult, as I began laughing so hard I was gasping for air and tears were streaming down my face. I’m not sure if it’s Wales, or Sandy, or jet lag, but I have laughed until I cried quite a bit on this trip. When and if we share the video, you’ll hear me in the background, cackling like a lunatic. 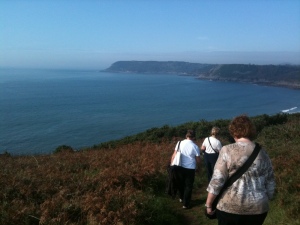 During our trek we lamented the fact that until that time, we had grown quite fond of our guide, and had been considering packing him and his lovely lilt in our suitcase when we left.

We reconsidered our opinion as we recalled he HAD mentioned a short bit of the trip would not be paved, and wondered if he POSSIBLY knew about this little detour, and was having a bit of fun.

As we trod along the hilltop, with the sea to our left and… a golf course on our right, dodging potential concussive shots from bad golfers overshooting the greens, we finally found another blasted arrow and knew we were on the right “path.” For awhile, we weren’t sure if we had wandered the wrong way, as none of our companions, except the Canadian women with us, had been spotted ahead or behind.

Sandy and I trudged downhill, and stumbled to a stop beside Adrian’s bench, where he sprawled, comfortably soaking up a few rays.

“THAT was just mean,” I said, starting to laugh again at his puzzled expression, and feeling like a lazy American. Sandy managed to clarify the situation, and when he realized what had happened, I have to give him credit. He dropped to his knees on the concrete, grasping our hands and begging forgiveness. He also looked a little panicked about the fate of the others.

Now, I also must report that we apparently broke with tradition, as Americans NEVER finish the walk first. So, we did accomplish something for the good old USA. (Cue the national anthem.)

The Canadians came in behind us, then the Indians, then the gentleman from somewhere. (Sandy says definitely North American, but we missed specifics.) He had climbed around the barricade, as men tend to do, and been turned back by the workers, so he took a more scenic route.

All in all, it was a great bonding experience. We were out of breath, sweaty, and tired from our leisurely stroll, and we still had several more stops to make for the day.

Walking was wisely kept to a minimum after that.

We saw a 7 thousand year old burial ground, had lunch overlooking Rhossili Bay, then went to a castle that could fit inside the great rooms of the other castles we’ve visited this past week. Still, the descriptions provided by our guide were entertaining and educational. And that LILT! Scrumptious. (No offense, hubby.)

Here are some sheep lounging in the form of a check mark. I’m not sure why, but it just seemed suitable for today. Lost on side of hill? Check. Sheep? Check. 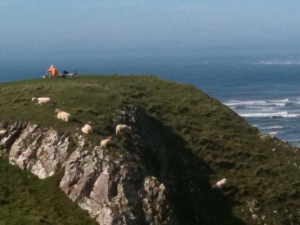 Plus, the drive home to Cardiff was filled with music by Tom Jones, Petula Clark and Shirley Bassey. (Welsh, one and all.)

It was a nice way to end our stay in Wales. Tomorrow, London, where I look forward to seeing a wise-cracking friend, and possibly her equally sharp witted fiancee, before attending a show.

Goodnight, Wales. It’s been fun. Let’s do it again soon.

Okay. Here’s the damn “Lost Tour” video. Hubby is not mentioned amongst those we are leaving behind because 1, Sandy was only worried about parents missing us, and 2, I was too hysterical to get much more than one word out. Sandy was in charge of me.

4 thoughts on “WE ARE NOT MOUNTAIN GOATS”