I’ve been asked recently about the “frustrated former war lord” bio on this blog. It’s probably not as good a story as one might think. I haven’t had a past life regression, and I haven’t battled anything in this life more terrifying that a couple of old boyfriends and an addiction to aerosol cheese. Frustrating, yes. Life threatening, no.

Here’s the scoop: Many, many years ago – maybe 15 or so… I went to see a psychic. I do not do such things often, and certainly not for “real” advice or direction. In fact, I think my total number of visits to psychics is four.

The woman I saw that Fall day 15 years ago looked pretty normal. She did the readings in her home, which was decorated just like a grandmother’s house. Doilies, upholstery that was not particularly fashion-forward, and pictures of children and grandchildren in the foyer.

We sat in her study. She pulled out a note pad she had been scribbling in while she awaited my arrival. She told me she often begins by reading these notes to her client. You see, the Guides would sometimes start communicating with her before the official session.

“Yes,” she said. “Like guardian angels. Everyone has Guides who watch over them and help them throughout their lives.” She went on to explain that most people have two or three Guides. She was quite impressed with me.  I had SEVEN.

“Seven? Is that normal?”

Sure, I thought.  I can’t find a doctor to marry, but I have three hovering around in an alternate universe or plane, or something. Awesome. My first internally voiced questions were, “Why do I need three doctors??  Is something bad going to happen? Or are they keeping something bad from happening? Will there be blood involved? Pain? Crap.”

Any friends who read this are currently saying. “I know why you have three doctors. Because you’re a walking accident. A klutz. For someone who was once athletic, you can’t walk to the fridge without clipping your shoulder against the door frame, or tripping over a dog toy. You have no concept of your physical space in relation to the rest of the world’s solid objects. THAT’s why you have three doctors. AND why we won’t EVER let you go skiing, Ms. Bono.”

I had to let the doctor questions go because Madame Psychic was still talking about the other Guides.  In addition to the three docs, I also had a Joy Guide. “Wow,” I thought. “I have a terrible Joy Guide.”

Joyful would not be an adjective in anyone’s description of me. Which, I suppose, is exactly WHY I would be in need of a Joy Guide. Who knew?

Scary thought: Maybe my Joy Guide was actually doing an amazing job. Oh, and by the way – the name the psychic jotted down as my Joy Guide? Shamu.

Stop laughing. This is a serious story. My name is Ann. I am a former Warlord and my Joy Guide’s name is Shamu.

Since I’m already revealing all this psychic mumbo-jumbo, I might as well confess I believe I met my Joy Guide several years later. I know, I know. It may have been (probably was) a dream. The psychic told me during our session that my Guides wanted to reveal themselves to me, but knew I wasn’t ready. “Amen to that,” I thought. As one part of me thrilled at the prospect of some spiritual entity revealing itself to me, another part of me freaked at having some spiritual entity REVEAL itself to me.

So anyway, I was asleep one night years later and awoke suddenly. On the side of my bed sat a shadowy female figure. My brain was telling me I should freak out NOW, but instead, I looked around the room to see if I could determine if I was awake or not, or if my eyes were just playing tricks on me. When I looked back at the side of the bed, she was still there. She was plump, and black, and had on hoop earrings. My brain supplied the name. Shamu. I think she was Jamaican. I have no idea why I think that, but I do. Anyway, she just nodded and smiled at me and then dissolved. Feeling strangely pleased, I went back to sleep.

Now, back to the session with Madame Psychic.

She startled me with a few revelations even some of my closest friends didn’t know, and I was really starting to feel a bit creeped out. Then, as casually as if she was mentioning a fact like, “You have blue eyes,” Madame Psychic says, “Well, you KNOW you were a Warlord in another life.” 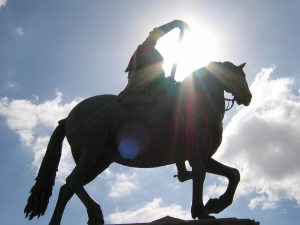 Forget Guides. THIS was obviously a mistake. My eyebrows shot heavenward and I’m sure I smirked. She actually scowled at me. “This is a much more humble existence for you, of course.”

“You have no idea.” I rolled my eyes.

When I left I was angry. A Warlord?? I had been a Warlord and was now reduced to being an insecure, self-sabotaging female. I supposed this was retribution for all that pillaging and plundering I had once enjoyed.

So there you have the balance of the universe. Kick ass in one life, cry at chic flicks and have people ask if it’s “that time of the month” when you’re out of sorts in the next.

Now I find the Warlord thing amusing (obviously), since I included it in my profile. When I am feeling particularly frustrated or powerless, I just think, “Well, you brought this on yourself, you badass. If you hadn’t kicked so much medieval butt, you’d be having a better day, wouldn’t you? But, no, you HAD to be a Warlord. You HAD to sack that village. So suck it up. You had your fun. Go pet a puppy or something.”

Yep. Nothing cheers up a former Warlord like – a basket of puppies.

5 thoughts on “CONFESSIONS OF A FRUSTRATED FORMER WARLORD”