First, I better find a job that pays more or win the lottery because I will never be squished into a seat again that doesn’t have at least this much leg room. Especially for an almost 10 hour flight. 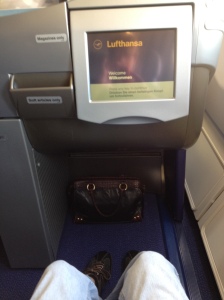 The problem with purchasing from Duty Free at your airport of departure is that they deliver it to you on the plane, therefore you haven’t been lugging it around, growing accustomed to the weight. We bought a bottle of Absolut and two bottles of Sonoma Cutrer to keep in our hotel room refrigerator. That way, we wouldn’t have to spend 15 euros per glass if we wanted a night-cap. Great plan. Bad follow through. Had we been lugging it around, we’d have noticed leaving the plane that we felt lighter, but such was not the case. We were making our way toward the Customs desk in Frankfurt (our layover stop) when I asked Robert, “Do you have the wine?”

When asked about retrieving it, we were told we’d have to leave the security area and speak to someone about it. We decided to send a nice email upon our arrival in Paris and try to forget it.

We moved dejectedly on to the Lufthansa lounge in Frankfurt, which we noted was possibly the least attractive airport ever. I apologize, but seriously. The overhead lighting looked like something the Gestapo used when pursuing the Von Trapp family. We couldn’t decide if it was industrialist, under construction, or just horrible.

We boarded our flight to Paris an hour later. I had three goals in mind for this short, one hour flight:

Have a glass of champagne, finish reading, Shadow of Night, and DON’T FORGET THE BOTTLE OF VODKA UPON EXITING. Yes, we bought another bottle from Duty Free. Call us hopeless optimists.

We checked into the hotel and went to our room, which had a view from the terrace of the Eiffel Tower. 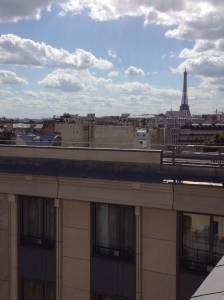 Robert (Drill Sargeant Franks) decided we should take a walk to get our bearings, so he marched me out the door, down the Champs-Élysées all the way to the Tuileries Garden and Place de la Concorde. 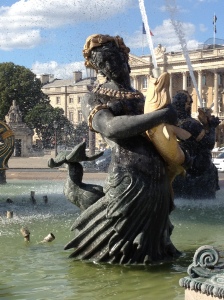 That evening we had reservations at Robert’s restaurant of choice – Robert et Louise in the 3rd arrondissement. If you look up “hole in the wall” in the dictionary, this place is what you’ll find pictured. He’d seen it on Anthony Bourdain’s show and HAD to go. Getting there was an eye-opening experience. I have never seen traffic like in Paris. It makes New York City taxi drivers look like a bunch of little old ladies out for a Sunday cruise. Motor scooters create their own lanes, weaving in and out of cars, cutting it so close I shut my eyes several times in anticipation of the impending “thump-thump” as we ran one over. We are talking mere inches between human beings and vehicles.

We were greeted warmly by Robert, then led down a tiny, narrow flight of stairs to the lowest floor, where small tables and a bar were crowded into the space. We shared a rib eye for two, not realizing that medium rare would be rare in French cuisine. I think I’d heard before that our medium is their rare, but forgot. The meat was still cooked fine for me, but my Robert prefers the cow on his plate to not still be “mooing.”  And when I say plate, what I really mean is a wooden cutting board that would NEVER in a million years pass health department inspection in the US. I had to concentrate really hard on not thinking about the potential germs and bacteria on that piece of wood that looked as old as the building itself. The rib eye was incredible. 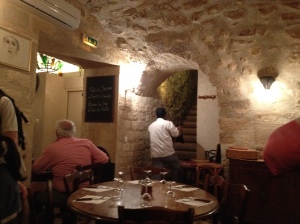 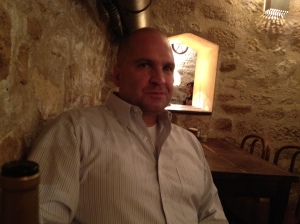 Sighing, I looked down at my heels, then at my husband, then at the cobble stone street that awaited. We eventually did find a cab – somewhere past that last 5 minute stroll. In the middle we passed a number of restaurants or clubs, with people pouring out into the streets laughing and drinking and smoking.

A chorus of French accents washed over us as we held hands and tried to not gawk at each passing scene. Our ears were just beginning to acclimate to the rhythms of the conversations we’d be hearing for the next 9 days. My Robert’s grin told me I’d be lucky to pry him out of France at the end of that time.

Back at the hotel, we (of course) had some vodka on our terrace and discovered this projected video show in the hotel courtyard. Pretty impressive, and it drove home the realization we were going to be discovering all kinds of unexpected visual delights throughout our stay.