Day three found us preparing for our much-anticipated lunch at the Eiffel Tower (La Tour Eiffel). Robert made reservations in advance for Le Jules Verne restaurant, which sits 125 meters high in the Tower – or about a third of the way up. Several benefits here. One, it’s a Michelin 2 star rated restaurant. Two, lunch is less expensive than dinner, and three, you can enjoy the view without waiting in line for hours, or paying the extra ticket fee.

The restaurant entrance is to one side, and private. You are escorted up the elevator by an attendant who deposits you in the lap of luxury. We were one of the first seated, and as we made our way down the line of wait staff, we were greeted by neatly dressed men and women who welcomed us with “Bon jour madame, monsieur.” I felt as though I were in a receiving line to meet the Queen. Once in the dining area we tried in vain to resist the urge to gape.

We maintained our dignity just long enough to agree to an aperitif when we couldn’t stand it a moment longer. I wanted to photograph everything. The tables, the place settings, the view… it was ridiculous. With champagne in hand I looked across the table at Robert and saw a look on his face I don’t know that I have ever seen. For a moment I thought he might well up with tears. Which of course made me well up with tears. (Perhaps we are way too affected by dining experiences and amazing views.) I think day three, at such a location, jolted us into the reality that we were in Paris. France. Finally. Again I wondered how I would ever convince Robert to return home. 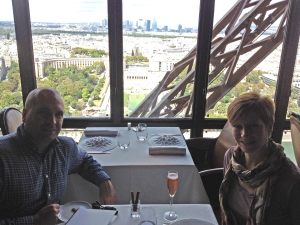 Of course, we were not too intimidated by the surroundings to include the lovely Flat Marketing team. 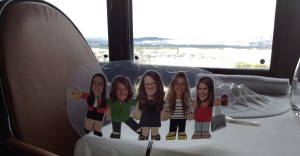 At which point we became the giddy American tourists again.

We selected from a prix fixe menu, and each item arriving at the table was more creatively arranged than the last. It was almost a crime to destroy them by taking a bite.

This was even prettier but I had to re-create it when Robert nearly throttled me for removing a piece of the “country toast” before snapping a photo.

Afterward, we stepped out to the second level viewing area. It was getting cooler and the wind was whipping up. Security was watching so closely one came up and told me to close the flap of my purse, which I had open right in front of me (between myself and the railing) while I snapped a picture. I became instantly paranoid, which is probably a good thing.

To walk off the rich lunch, we strolled along the Seine until it began to rain and we had to seek shelter next to a food vendor’s shop. Although it didn’t last long, we were now damp and cold, so we made our way back to the metro (which was still giving us fits with the passes) and returned to the hotel to get ready for our dinner cruise with Bateaux Parisiens. This trip is all about the food, apparently.

We splurged because I was wearing ridiculously high heels and took a cab directly to the river to board the boat for an 8:00 departure. What ensued can only be described as a romantic food and drink fest. I think we had two bottles of wine. (Hey, they came with the dinner, basically. One red and one white. Plus an aperitif to start.) Champagne, anyone? Why yes, thank you.

If you go to Paris, you MUST do this cruise. The food was excellent (from what I remember), and you see beautiful sites, all lit up along the river. People dancing on the banks, other boats passing by… it was an event to remember. Unfortunately, I did have one of those directionally challenged moments while on board. If Robert had his own blog, it would no doubt focus on, nay, LAMENT my total inability to recognize anywhere I am or from where I’ve come. Seriously. Every day we took the same route to the metro, and every day on the way back to the hotel I would have SWORN we had taken a wrong turn. Nothing looked familiar.

Anyway, at one point, I excused myself to powder my nose, which involved going below deck. Upon resurfacing, I headed toward the left (port) side of the boat and got to the very bow without having seen our table, or my husband. I circled back on the starboard side, by which time, considering the small size of the boat, I had drawn attention from the wait staff. I informed the only one brave enough to ask that I had lost my husband. I am also ashamed to say I asked if there was another level to the boat, which is really sad because I had been sitting under the lovely glass top looking out all evening. 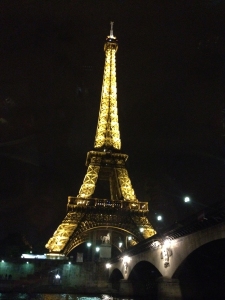 The waiter asked what side of the boat I’d been sitting on. I told him the left. He pointed and sent me on my way. Lo and behold, there was Robert sitting at a table wondering what had happened to me. I swear he ducked under the table when I passed just to mess with my head. 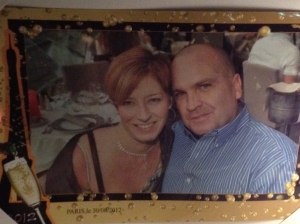 Regardless of my lack of an internal compass, we had a lovely evening and returned via cab to the hotel with only one near altercation. There was quite a bit of taxi cab line-crashing going on that evening and I may or may not have been quietly threatening to punch someone in the face if they stole my cab one more time when out of the blue came what appeared to be a homeless, drunk, French Santa Claus. He and Robert immediately took charge of the situation, bringing order to the chaos. Another international incident was averted, and Homeless Santa was tipped a euro as he opened the door to our chariot.

One thought on “DINING AND BOATS (PARIS, DAY THREE)”