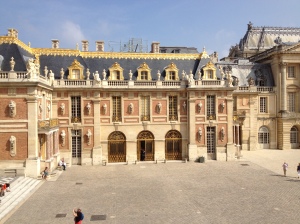 Today was the much-anticipated visit to the Château de Versailles. We had been forewarned by Rick Steves that Versailles is a zoo on Sundays and Tuesdays, but somehow ignored him and planned for Tuesday. Rick Steves was not kidding around. I am not a big fan of the crowded tourist destination. In fact, it made me long for the abandoned castles of Wales, where photos don’t contain strange people who make me want to punch them in the face. 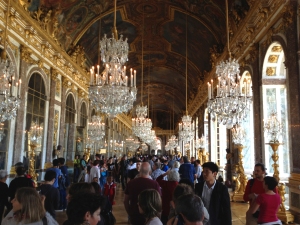 The hall of mirrors was elbow to elbow.

We did not take the audio tour at this point, because the line to GET an audio device was about a mile long. You’d think they were free or something.  Oh, that’s right. Audio tours ARE free.

The lack of audio led to the challenge of fighting our way through the hordes of humanity to get to the sign in each room that identifies exactly what you are looking at and why. Hopefully. Meanwhile, you are hearing the multiple languages spewing from audio devices all around you. You are also getting really annoyed and trying to determine which country has the most obnoxious tourists. I think I’ve narrowed it down to Japan and Germany. I’ll throw the U.S. in just for the sake of argument. Robert actually had to body-block one guy who was trying to cut in front of us for yet a third time. I started taking pictures with my arms extended over my head – so now I have shots of the tops of people’s heads or strange photos showing a part of a room. 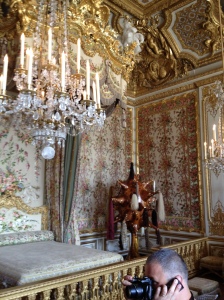 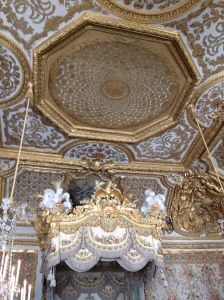 As we exited the Chateau we noticed the crowd had thinned considerably in line and realized perhaps afternoon was a better time to visit the palace. We decided to give it another try tomorrow and went on to lunch. This was probably wise, as my patience was at an end. I was grumbling at people and riding an emotional roller coaster between “Oh. My. Lord. I can’t believe how beautiful this is – what is it?! When was it?! Who was here?! Wow wow wow!!! Hey! Get out of my way! I wasn’t finished! Stop shoving me or I will punch you in the face! You cannot possibly be as interested in this as I am. Who invited you anyway? Off with your head. Grrrr.” 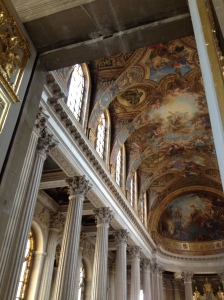 At times like that, it’s really best to just take me somewhere and feed me and hand me a glass of wine. Or two. Which is what Robert did. Smart man. We found a brasserie right by the market called Au Chat Qui Prise where we ordered ham and cheese with cheese topping and a side of fries. This was possibly the best meal we had in France. (Okay, Jules Verne was good too.) But it was CHEESE. Robert added an egg to the top of his ham and cheese with cheese.

Feeling much more the thing, we returned to the hotel where I sat on the terrace reading Marie-Antoinette and communing with the sheep while Robert soaked in the giant tub and looked out over his kingdom. (He has composed a blog post himself about this day, which I will be including following this.)

Our dinner was scheduled at Gordon Ramsay, which was conveniently located in our hotel, so we didn’t have far to go. This was another of those restaurants Robert was looking forward to like a kid at Christmas. We were seated by the large terrace doors which were cracked open, letting in a cool breeze. The table overlooked the King’s garden, so our friends the sheep and goats were there, and from this level I was able to see horses in the pasture just beyond. We had another of those moments where we looked at each other and giggled like kids over how perfect the setting was.

We ordered aperitifs and were presented with an amuse bouche. The first round of these was divine. Some sort of cones made from squid ink (what?!) and tuna. Even the “plates” were intimidating. A second round of “amuse” arrived. Even after the waiter explained to Robert what his was (mine was a soft-boiled egg in a container that looked like a medieval mace) we still didn’t know how he was supposed to eat it. That’s what we get for just nodding at the waiter as he speaks to us in thickly accented French. It had a side shot of liquid, was in a soup bowl, and had a covering made of something edible that looked like wax paper.

The appetizer Robert ordered was undercooked. It was lobster, and he couldn’t even cut it with the steak knife he’d been given. The waiter was kind enough to delete it from the bill. I know the steak temperatures are different in France than the U.S. Perhaps that was the state in which they wanted the lobster to be?  Thus, the steak knife? Not sure, but it just didn’t seem right and was certainly not what we are used to. (Like we eat lobster on a regular basis. Ha.)

The main course was very good, but still not as mind-blowing as we expected – especially for the price. The service was impeccable though, and the view divine, so we sat back and enjoyed.

I think we broke the waiter’s heart when we turned down dessert. It was probably a slap in the face, but we couldn’t bring ourselves to eat another bite.

Our plan for the following day (our last in Versailles) was to return to the Chateau at a time that might allow us to avoid the crowds, then head back to Paris where we would stay at a hotel by the airport in order to decamp by 8:00 a.m. We’ll see how that goes.

4 thoughts on “AU CHAT AND THE CHATEAU (VERSAILLES, DAY EIGHT)”