Sandy and I met at the airport around 7:00 at DFW Terminal D and after passing through security with no fatalities, made our way to the Admiral’s Club. There we enjoyed a couple of drinks – Sandy a Sprite and me two glasses of wine – until we made our way to the plane. We were among the first to board in Business Class. This was deliciously different from our flight to London two years ago, on the way to Wales. That trip involved my knees rubbing against the seat in front of me for nine hours, and trying to sleep with my head on the tray on the back of the reclined seat in front of me. I’m not sure how I un-pretzeled myself after that, but I swore I would never be tortured that way again. I couldn’t move my neck for MONTHS.

Therefore, our investment in Business Class this time. Once you take a long flight somewhere and do it in Business or First Class, you’ll never go back to Coach. Not without tears and gnashing of teeth. We got situated in our adjustable recliners and were instantly handed a glass of champagne. We were also handed the greatest thing ever. Warm mixed nuts. This was an unexpected treat. A treat until the flight attendant scooped the bowl of nuts away from Sandy mid-bite and moved her on to the next course.

Around this time we learned the other flight attendant, (a.k.a. The Good One) was a wine drinker and who returned to us often. (Well, more ME than US.) Then, after we took off, our multi-course dinner was served. This too went well, except the scary flight attendant kept snagging Sandy’s plate while her fork was still moving back and forth between the appetizer and her mouth. The same thing happened with the salad and the main course. The only thing the woman didn’t snatch away was the ice cream sundae, which remained long enough for us to watch the last of it slowly melt. The rest of the flight was wonderful. I think I actually slept maybe 5-6 hours, basically undisturbed, unless you count your left leg falling asleep and getting that pins and needles sensation. But overall, it was heaven in comparison.

Once we exited the plane, Sandy kept referring to our last time in London and how we got to the train, etc. Since I had been nearly comatose the last time we came through Heathrow, I was no help AT ALL.

After waiting 2 hours to check into our room (time that was spent on the terrace eating the Sea Box and Meat Box and having a Kir Royal or two, we showered and changed, then staggered out into the perfect 75 degree weather.

We strolled to Westminster where we immediately entered the souvenier store and then began snapping photos like tourists. Sandy is operating a new camera – the Cannon G15, so there’s a bit of experimentation going on. I was operating my iPhone 4S, which refuses to turn off unless its battery is completely drained. The attached photos are mine, as the internet connection isn’t working yet to download Sandy’s “professional” photos. 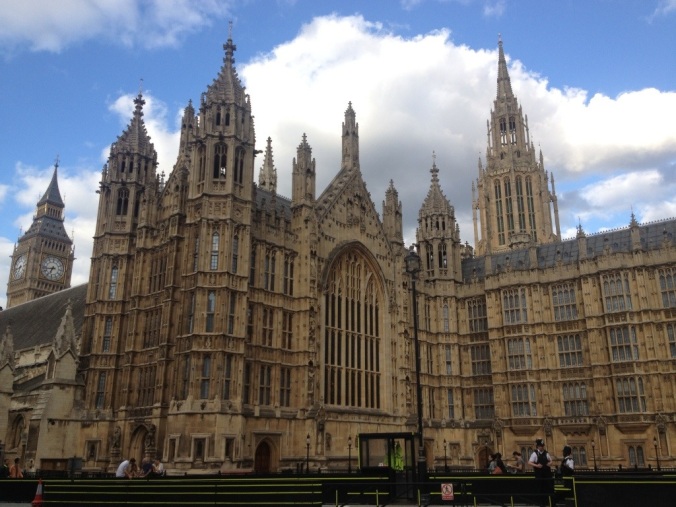 This evening we had the requisite fish & chips and are turning in “early.” Tomorrow, friends Amy and Dave meet us and we head to The Tower. After I drown myself in coffee. At some point I’m sure we will be experiencing pub fare. A lot of pub fare. And a tour of London by those who live here.

So far, I have noticed the British seem to be stingier with water than the Mexicans and French are with ice. Dehydrated from the plane, I asked for a big glass of water and received a thimbleful that was never refilled. Is water short in the UK? Do we need to stage a telethon to save the water? Has anyone heard of a large glass around here that holds more than 4 ounces?

That’s all I know for today. Wish me hydration. And that the air conditioning in our room motivates itself to cool us at least as much as the cool setting on my hairdryer. Otherwise, I may break glass in case of emergency and enjoy the 60 degree night air just beyond my reach.