The A/C in our room was fixed last night, which resulted in us huddled in our respective beds and suffering temperatures equivalent to a meat locker. We buried ourselves under every blanket available, afraid to touch the controls lest we spend another night in the 5th circle of hell. Sandy caved in during the wee hours and raised the thermostat, claiming her lips were turning blue. Eventually, we thawed and awoke at 9:00 to a slightly chilled, but overall more pleasant atmosphere.

After quick showers and an attempt to erase the puffiness under our jet-lagged eyes, we met Dave and Amy on the verandah and headed to the Tube for a trip to the Borough Market, home of the much coveted and even more craved grilled cheese sandwich. I even opted out of coffee, knowing the market would be bustling with vendors.

Half an hour later, to Sandy’s crushing dismay, our little tribe arrived to find the market closed on Sunday. While it made for excellent photography of the structure, it did little for our stomachs.

We walked along the wharf, crowded with people, eyeballing various restaurants, but the chain variety didn’t tempt us until I became sullen and cross, at which time a pizza place arose like a mirage and we dove in, hoping to appease my hunger and brighten our moods with an infusion of bread and cheese.

After strolling until I thought my feet were bleeding, we returned to the hotel, packed up Amy and Dave, and headed back out to make our 5:00 reservations for the Warner Bros. Studio Tour – Harry Potter. This was a Sandy treat. I have to say, as an HP fan, that it was extraordinary. I’d have enjoyed it more if my feet and legs weren’t screaming at me to get off them, but it was wonderful all the same.

I am including a few pics, although Sandy has the majority. During the tour you learn how the film was shot, how much was green screen, and what was digitally created versus real. We saw the Common Room of Gryffindor, the Main Hall, the Weasley’s home and the Ministry of Magic. Also, you could jump on a broom and ride in front of the green screen as if you were playing Quidditch. Believe it or not, I did not do this, but I did enjoy watching the kids who did.

We saw masks and amazing elevations and architectural drawings of Hogwarts and the village. At the end of the tour, you enter a giant room that has lights changing from dawn, to midday, dusk, and night over a large scale replica model of Hogwarts. It was breathtaking. The amount of work that went into the model was beyond impressive. In fact, it was a near religious experience. 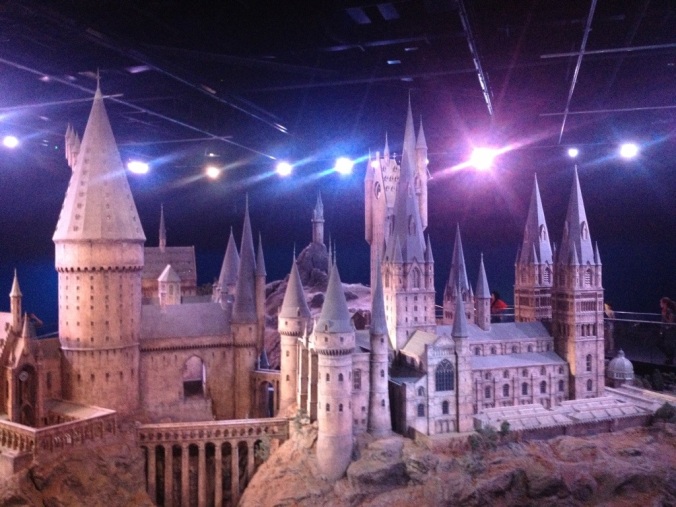 Of course, we had the usual Ann disturbances of OTHER PEOPLE, who often didn’t realize how close they came to being smacked and told to wait their turn, but overall, everyone survived unscathed.

Amy and Dave dropped us at the train, and we managed to find our way back to the hotel without incident, unless you count the reenactment of French Connection our cabbie performed through back alleys when he became annoyed with another cabbie and tried to beat him to the next intersection.

We ate a late dinner at the bar and are retiring in order to be semi-awake for our tour to the mythical stones of Avebury, Glastonbury and Stonehenge tomorrow, via our charming private tour guide. There should be much to report regarding the history of these locations. Apparently, to be rated with a blue badge, you must pass tests regarding these locations. I plan to know everything about them to tomorrow evening.

Special thanks to Amy and Dave for showing us around and making the first days of our trip so enjoyable. And for putting up with our vagaries. Everyone should have tour guides as patient and kind as these two.