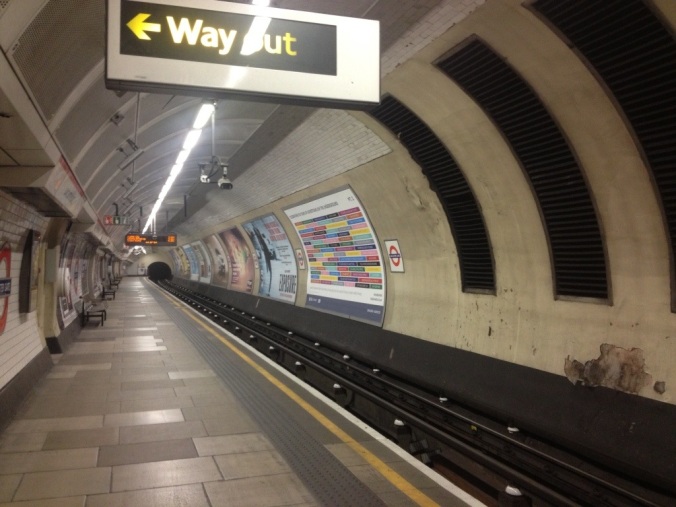 I’m proud to say we once again braved the Tube and ended up exactly where we were going. Kensington Palace. This was the childhood home of Queen Victoria and the home of William and Mary. Currently, it also plays host to the Fashion Rules exhibit, which traces the history of the clothing worn by Queen Elizabeth II, Princess Margaret and Princess Diana.

The presentations are beautifully arranged and when we arrived around 11:30, there was not but a small crowd in the rooms. Following are some of my favorite pieces. All I need is a World War to eliminate bread and sugar from my diet and I might achieve a waist this size as well. If I remove a rib or two. 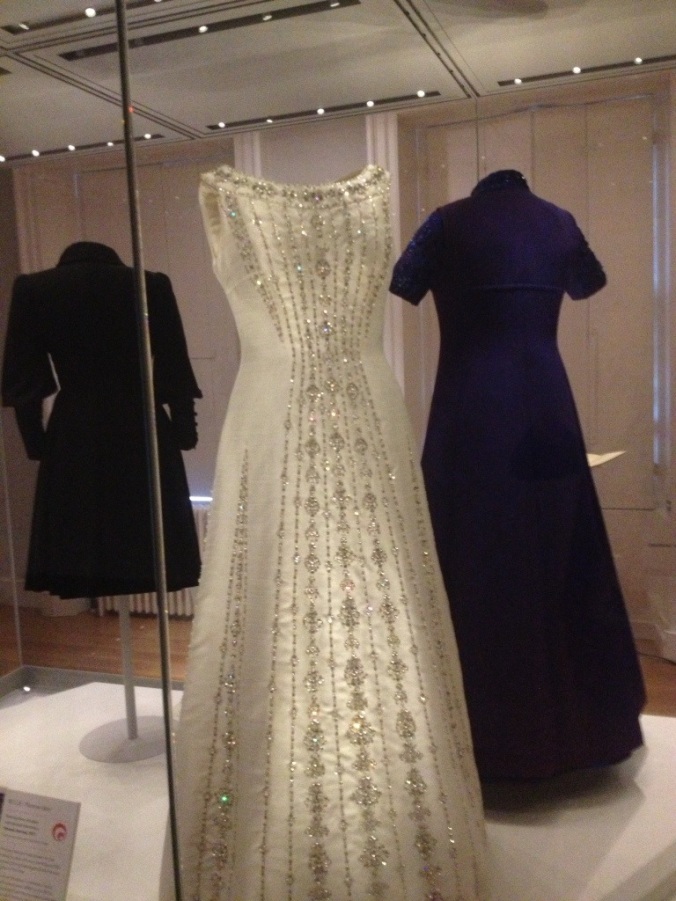 Meanwhile, the other rooms are dedicated to two sad stories. One is that of Queen Anne, who lost 17 babies. She finally gave birth to a boy, William, who though rumored to be quite frail, danced and danced at his 11th birthday party. Hours later, he went into a troubled sleep from which he never awoke. Anne was broken hearted and went to her death years later knowing the monarchy would pass into the hands of a distant relative. It landed (after much passing of laws to surpass approximately 50 others) with her second cousin George I. He was 41 when he discovered he was in line for the throne.

This exhibit was titled Anne’s 18 hopes.

The second tragic story is that of Queen Victoria. She was madly in love with Albert. They were married and had a veritable gaggle of children (9)! Unfortunately, Albert died rather young, at 42, leaving Victoria mourning for the rest of her life. There were even calls for her to abdicate the throne if she couldn’t snap out of it. She wore official mourning until she passed away 40 years later. They appear to be the first royals to be truly in love.

We stepped out of the gloomy story and into the garden where we were nearly blinded by the beautiful flowers. A couple of photos are below.

After a short trip back to the hotel to catch our breath, we decided to fast forward to World War II. The Churchill War Rooms were a startling look at underground headquarters for the core of the the British Government during WWII. How these people lived and worked, day in and day out without sunlight, without knowledge of what exactly was going on outside, is astonishing. It’s like a land-locked submarine. There were signs announcing the weather. Warm and fine, etc. We became completely enthralled with the history of Churchill and had to rush the last of the War Museum before closing. The map room is on view, complete with a graffiti version of Hitler drawn on one map, and Churchill’s bedroom, where he reportedly spent only three nights, aside from his daily hour long naps that broke up his 18-hour work days.

We may have to return to the gift shops, where I found wartime slogan magnets and posters with helpful hints like, Eat Less Bread. There was also a modern take on the Keep Calm theme that directed, Sod Calm and Get Angry.

Meanwhile, strange spottings today: one was apparently what UK buddy, Dave, refers to as a hen party. The other is a look-alike of the week. A muscular Ben Kingsley.