Well, I’m fast approaching my fourth week out of radiation. Still have some itchy skin, and some bizarre throbbing pain every now and then that I assume is a sign of continued healing. They said the radiation would keep affecting me for 2 weeks after we actually stopped, and it did. However,  I was so anxious to return to a regular schedule, I might have not been as patient as I should have work-wise. As a result, by the end of the week, I’m beat. I keep swearing I’ll sleep all day on the weekend, but I seem to live in a sports bar, with all day college football games on Saturday so that’s not really happening. Even without the sporty-sports, I start getting antsy after 9:00AM and feel as though I’m wasting a perfectly good day.

Currently, everything feels surreal. Each day I hear about something that happened since May or June, when all this started, but I have almost no recollection of it. I feel as though I’ve gone through each day sleepwalking. Hopefully, I’ve been functioning somewhat, anyway. I know I was TRYING.

I have neglected to report an event from two months ago. I just couldn’t address it until now. To add insult to injury, our sweet Daisy doggen became ill suddenly and had to be put to sleep. Cancer strikes again. We STILL haven’t recovered from THAT emotional devastation. Maybe it’s multiplied by Robert’s and my lowered immunity to bad news and almost psychotic need to have SOMETHING be normal at this point.

During that dreadful day, when the chips were down, my friends responded like they’d been waiting for an opportunity to rush to the rescue. “The Duchess” and Tony W came to stay with Gracie, the basset we adopted so she and Daisy could be little old ladies together. So much for that genius plan that lasted all of 8 months. Robert, Austin and I stumbled, bleary-eyed and in a state of shock, into the vet clinic to say goodbye. By the time Daisy drifted to sleep with Robert reassuring her and all our hands on her, I thought none of us would be able to get up off the floor, maybe ever again.

We drove home saying things to try to make each other feel better, but it was a sniffly, teary ride. Austin was so supportive. I wish he hadn’t been home to go through that, but then again, I’m glad he was. Derek was in Missouri, so he didn’t get to say his goodbyes. But if all four of us had been on the floor weeping, it would have simply been too much to bear. By the time we returned home, I thought “the Duchess” had probably pet a hole in Grace, (to comfort her.) So, once in the safety of our living room, there were five of us with red, watery eyes and a dog who was wondering what the heck was wrong with us all and WHERE had we left her “sister.”

As a result of the glorious past… 5 months(??) I get really emotional. Not sure if that’s the medication, or if it’s the experience(s), but I really want to take some time to sit still and figure out what all has transpired. Punch drunk, I guess you’d call it.

I’m hoping this doesn’t sound too negative. I’m also grateful for the support of family, friends, readers and visitors. Also, (most importantly) my Robert has been amazing, and wonderful and has had to deal with a lot of crap. So, if I haven’t said it enough, you rock, mister.

And now, just so we can well up some more… 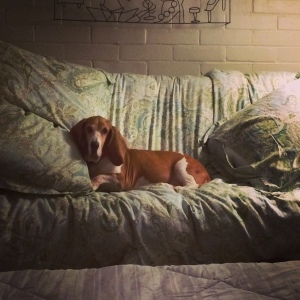 Sweet Daisy doing her impression of Rose in the Titanic movie. 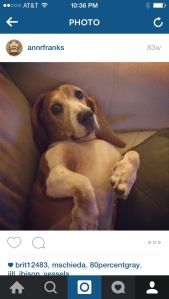