On our fourth day in Paris, we awoke early and prepared for our trip to . We had lunch reservations at 12:30 at Les Bouquinistes, a Guy Savoy Michelin star restaurant. It sits on a street corner across from the booksellers who line the banks of the Seine. I really have to get over my fear of photographing food so I can do it justice, instead of quickly snapping a shot before stuffing my face.

However, I do have a photo of yet another basket of the amazing bread that is ubiquitous in Paris. We were all alone in the restaurant for at least a half hour before others began sauntering in. This was one of my favorite meals, although since I have not written in so long, I have completely forgotten what it was I ate. I just recall, over the net few days, Robert and I saying, “That was the best so far.” 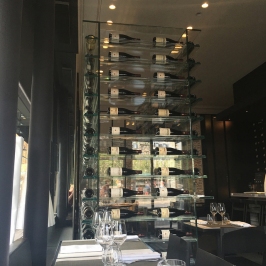 After lunch, we headed for St. Chapelle, where we would meet our friends, Dave and Amy, who traveled in from the London area to join us for the weekend. Squeeee!  Robert and  I had museum passes – which we highly recommend – but instead waited in line with our friends so we could visit and discuss our plans for the evening. Plans that included a dinner cruise down the Seine. Or maybe up the Seine. Or both really.

Robert and I are absolutely gaga over St. Chapelle. The last time we were in Paris, it was still under renovation. This day, it was clear of scaffolding and the stain glass was magnificent. St. Chapelle is a royal chapel, Gothic style, within the medieval Palais de la Cité, the residence of the Kings of France until the 14th century. Arranged across 15 windows, each 15 meters high, the stained glass panes depict 1,113 scenes from the Old and New Testaments recounting the history of the world until the arrival of the relics in Paris. 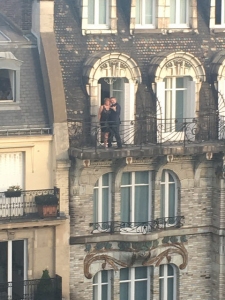 Afterward, we stopped at a sidewalk cafe for an adult beverage, then made our way back to our hotel. Amy and Dave were housed across the street, which of course led to a large number of balcony photographs. I’m sure people in the other rooms both on our side and theirs wondered who the crazy people were.

Once properly dressed and thoroughly cleaned up, we were ready for the evening. We had reservations on the Bateaux Parisiens dinner cruise to celebrate Dave’s birthday. Robert and I had gone on the dinner cruise our previous trip to Paris and loved it. Except for that part where I actually got lost on the one story boat. Other than that, the food and drink had been quite good, and the scenery as you float down the Seine and watch the lights of the city and Eiffel Tower flicker to life is gorgeous. This time, we decided to splurge for the absolute front of the boat. You know, where the rich people hang out. 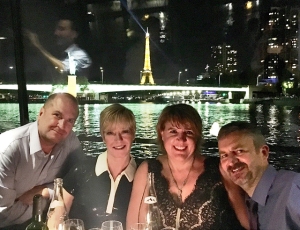 While a good idea in theory, in practice it didn’t quite pan out. As we sat visiting at our table, waiting for the boat to begin its journey down the river, we were growing quite warm. We kept fanning ourselves and saying, “Once we get moving, a breeze will help, I’m sure – and maybe that’s when they turn on the A/C.” That’s when we found out. The air conditioning was OUT in the front of the boat. Elsewhere it was working fine. Imagine our amusement. I must say we were all pretty worn out and tired of sticking to our seats and “glowing” by the time we docked at the end of the evening. It was a terrible shame, especially with the additional investment we made. No one came by to offer any sort of apology or to mention anything about a discount or partial refund. We took some photos early on, before we began to droop too badly.

I was so miserable I don’t recall much about the food. I just remember thinking instead of the Bateaux Parisien, we were apparently aboard the African Queen. The company, of course, was excellent. If you have to be trapped aboard a hot boat in the middle of the Seine, eating a heavy French dinner, Amy and Dave are the people to share that experience with for sure.

We had intentions of phoning and discussing with them the following day – or even after our return home, but ended up just letting it go. However, on the way off the boat, we may or may not have acquired a bottle or three of wine that made its way back to the hotel with us. So, we are apparently thieves. To that I will only say, “Prove it.”

The four of us took a cab back to our hotel and enjoyed our ill gotten goods, and perhaps a little vodka over ice which went down far too smoothly as we chatted and watched the shimmering lights of the Eiffel tower and the golden glow from the Arch de Triumph.

Day 5 awaits, with the catacombs, lunch at Le Select (where Picasso and Hemingway regularly hung out), and a drink at L’Hotel (Oscar Wilde’s old haunt. And possibly current haunt.)